Edit: Desmos to the rescue! Access the Desmos version of this card sort HERE.

Name something. There's an app for it, right? Evidently, I've discovered the one classroom need that no programmer has addressed. Card sorts. Lots of teachers have started using card sorts in classrooms, since they are a higher-level activity and require more intellectual might than a standard question/answer kind of practice.

I looked and looked and looked. I couldn't find an app that would allow me to design a card sort for my own content. I will, however, say that Quia has a
card match program but doesn't offer a true card sort. So, I decided to try and redesign the use of a pre-existing tech tool. I wanted this card sort to be collaborative between two partners, but I didn't want them to share a device. I wanted partners to have equal control of the sort - not the primary device user to dominate the activity. I also wanted to be able to label the left side of the "sort board" vertical angles and the right linear pairs.

Really, if Padlet would allow other users to move posts, it would probably be the best choice here. But, alas, it won't. I did tweet the Padlet folks to recommend this feature (get behind me here MTBoS)!

Anyway, I decided to use Google Slides. Technically, it ticks off all my specifications. Multiple students can access the sort; I can label the left and right sides of the sort board using a slide master; and students can drag images to the left and right to sort them. I designed the original file and made 12 or so copies of the file for each group I anticipated on having. Then, I took those links and converted them to Bit.ly links for ease of access. I made group tents with their group numbers and individual Bit.ly links.

Here is a picture of the first sort students completed. It was quick and I used it as a formative check that students had mastered/learned the highlights of the previous day's notes. 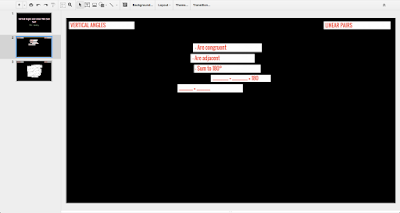 After students completed this sort, I had them raise their hand, and then I either physically went over and checked their sort or I did the same thing virtually (have I mentioned how much I LOVE Google?)

When students had this correct, they clicked on slide 3, which was really the heart of the activity. They needed to sort various examples of vertical angles and linear pairs into the two distinct piles. I actually uploaded my graphics into Padlet first (I forgot non-owners in Padlet can't move the posts). Then, I took screenshots of my cards from Padlet and pasted them into Google Slides. This was nice because I had automatic card numbers. These card numbers are how I always check card sorts. For instance, I knew that cards 2, 4, 10, 12, 13, and 15 (I think - going from memory) belonged under linear pairs - making my formative check really fast. 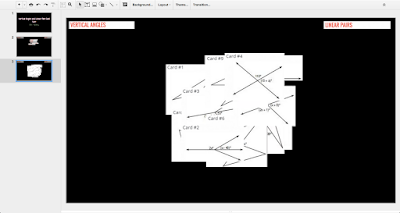 All in all, this activity accomplished exactly what I wanted - it just wasn't perfect.

Things I liked about making card sorts in Google Slides:

Things I disliked about making card sorts in Google Slides:

So... would I do it again? Yes... I think so. It is definitely not ideal, but it is better than cutting out 5,280 squares of paper. If you're reading this, and you know a programmer, get them on this. I would LOVE to chat with someone about the necessary specifications an app of this kind should have.
Posted by Unknown at 11:02 PM 3 comments:

I am the only AP Statistics teacher in my county. In fact,  (I think) I am the only stand-alone statistics teacher of any variety in the county. When I began our school's first AP Statistics program four years ago, I felt a whole lot like an island. My background in stats was a mere six (miserably-taught) hours in college a few years ago. Through a grant, I did identify a nearby mentor teacher and then, by my own devices, located a wonderful mentor online through Twitter. I am now in love. Statistics is a beautiful thing, people.  And even better, it's so awesome to teach.

I know there are folks out there - new statistics teachers at the high school level, new middle school teachers, or maybe more experienced middle school teachers acclimating to the stats-heavy Common Core State Standards - who lack resources, training, or -maybe- confidence concerning the teaching of statistics in a 6-12 math classroom. You are not alone. The best part - NC State is going to help you - FOR FREE.

NC State is offering a FREE online MOOC (Massive Open Online Course), "Teaching Statistics Through Data Investigations," beginning September 28th. Enrollees in the MOOC will have multiple opportunities to cater their own learning to the content level of interest. The course is designed to require 1-2 hrs/week of time and offers the opportunity to earn 20 CEUs.

Here is a video summarizing the opportunity:

Posted by Unknown at 5:58 PM No comments:

This work is licensed under a Creative Commons Attribution-Non-Commercial 3.0 Unported License.